The CC-Link Partner Association (CLPA) has further strengthened its position in the Asian market with the announcement of an additional GB/T Chinese national standard. GB/T 33537.1 ∼.3-2017 is related to industrial communications networks and establishes CC-Link IE as a recommended standard in the Chinese market. This means that companies adopting the use of CC-Link IE in their machines and systems could gain a significant competitive advantage in this vital market.

CC-Link IE is currently the only open gigabit Ethernet for automation and a de-facto technology leader in the Asian market, where it has seen widespread use in the automotive and consumer electronics industries. The Asian market is seen as being particularly important for European companies looking to expand globally, as it is estimated that approximately half the global spending on automation takes place there.

CC-Link IE's unique gigabit bandwidth is already well placed to support the demands of Industry 4.0 applications, and this new certification means that it will also be a leading choice for companies participating in the "Made in China 2025" initiative. The certification was announced at a high level ceremony at the Diaoyutai State Guesthouse in Beijing on April 19th, and was held in cooperation with the Instrumentation Technology & Economy Institute (ITEI). ITEI played a key role in the certification process by recommending CC-Link IE to the Chinese standardization committee on the basis that it had already received IEC 61158 and IEC 67184 certification. After deliberation by a working group of vendors and end users, the decision was taken to award the GB/T certification.

The presentation ceremony was hosted by National Technical Committee 124 on Industrial Process Measurement and Control of the Standardization Administration of China (SAC/TC124) and included around 100 people. Mr. Ouyang Jinsong, the Director of ITEI and a member of the "Intelligent Manufacturing" specialist working group of the Ministry of Science and Technology, went over the reasons why CC-Link IE was certified as GB/T. This was followed by the CLPA discussing the adoption level of CC-Link IE in Asia and its key role for innovation in manufacturing. Finally, end users such as Panda Electronics and others introduced case studies to illustrate the widespread adoption of CC-Link IE in Chinese manufacturing industry.

Mr. Jinsong, commented, "CC-Link IE has the functionality required for seamless manufacturing connections, from the production site through management layer. Moreover, cross-directional collaboration with other industrial networks is also in progress. CC-Link IE is expected to be a very effective solution for enhancing the Chinese manufacturing industry's competitiveness through 'Made in China 2025'. "

CLPA Europe General Manager John Browett said: "CC-Link IE and its fieldbus counterpart CC-Link have held leadership positions in the Asian market for years now. This latest certification is the result of CLPA's active involvement in this key global market and further acknowledgement of the benefits CC-Link IE can deliver to companies looking to build systems that will meet the demands of next generation manufacturing. The fact that it has now reached the level of a recommended standard in China is a clear sign of the importance attached to it by this market."

About the CC-Link Partner Association (CLPA)

The CLPA is an international organization founded in 2000 dedicated to the technical development and promotion of the CC-Link family of open automation networks. The CLPA's key technology is CC-Link IE, the world's first and only open gigabit Ethernet for automation and an ideal solution for Industry 4.0 applications due to its unmatched bandwidth. Currently the CLPA has over 2,900 member companies worldwide, with more than 1,600 certified products available from over 300 manufacturers. CC-Link is the leading open industrial automation network technology in Asia and is becoming increasingly popular in Europe and the Americas. 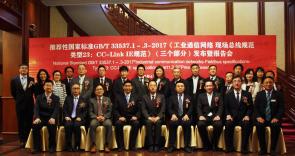 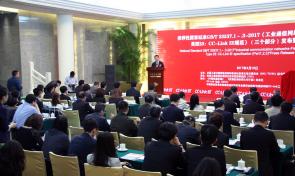