A deep dive into gigabit Ethernet

Establishing why 100Mbit industrial Ethernet technology is insufficient for Industry 4.0

As we embark on the journey to Industry 4.0, it is becoming apparent that industry’s reluctance to move beyond 100Mbit Ethernet technology is a very real limiting factor. CLPA-Europe General Manager John Browett argues that the transition to gigabit Ethernet networking technologies has to start now.

In 2016 the World Economic Forum looked at the impact of technological, demographic and socio-economic disruption on the employment landscape. Among its conclusions it postulated that, such is the pace of change, 65% of children studying today will end up working in new types of jobs that don’t exist yet. We can see, then, that business environments will change, and the pace of change is accelerating.

In manufacturing, we have an advantage, because we have already seen what the future will look like. That picture has been painted for us by Industry 4.0, and we know it’s a future that’s going to be built on data. And lots of it. Making the best use of all this data without its volume crippling the very systems that we are using to derive value from it, will depend both on speed and bandwidth.

If you’d told the people who just a few years ago were struggling to download even small photos over their internet connection, that just around the corner was a future where they’d be watching TV and movies on-demand over the internet, they would probably have thought you were mad. And yet that is exactly where we are today.

We have seen the same evolution in factory networks, moving from simple fieldbus networks for sensors and actuators all the way to employing Ethernet right down at field level. Now we are seeing the convergence of information technology (IT) networks and operational technology (OT) networks. In many ways it is the seamless flow of information between these two worlds that defines the possibilities of Industry 4.0. If the trend continues – in the same way as the World Economic Forum sees the jobs market evolving – we are soon going to see services arrive on the plant floor that we are just starting to imagine now.

The thing that we can be sure of, however, is that whatever bandwidth we believe to be adequate for today’s requirements, in the future we’re going to need much more of it. This is one of the reasons behind CLPA’s focus on open, gigabit industrial

Ethernet, and its argument that industry must begin the transition to gigabit as soon as possible if it is to reap the benefits of Industry 4.0.

Preparing for the factories of the future

There are those who argue that the speed and bandwidth debate is irrelevant, and that with the adoption of technologies such as OPC UA and TSN, bandwidth is just something we’ll be able to take for granted. But while they clearly have an important role to play, these are complementary technologies, not replacements for existing networking protocols. Network bandwidth in industrial applications is a debate we need to be having right now if we are to prepare ourselves for life in the factories of the future.

We may not know exactly what these future network infrastructures will look like, but we can already see some clues in cloud computing. The information throughput in most of today’s industrial processes is some way off being regarded as ‘big data’, but it’s a lot of information nonetheless. Right now, the information being sent to the cloud is, by and large, information for historical logging and trend analysis, separated from the real time control data by using the likes of edge computing platforms. But if the predictions of some companies are correct, then edge computing is just an intermediate step, and we could soon see the likes of virtual PLCs and virtual SCADA in the cloud, collecting data from and sending it to plant floor devices in real time.

If that picture of the future comes to pass, it will certainly need high speed networking technologies as a prerequisite. But even today, looking at the data we are trying to pour through our edge computing platforms, the standard 100Mbit technologies are surely feeling the strain.

We might not have felt that yet, because modern industrial Ethernet protocols are implemented to avoid collisions, so that OT performance is not impacted. But imagine a network that is transmitting both synchronous control information (I/O states, data registers, etc.) and asynchronous information such as alarms, quality data and other messages. A machine jam or a parameter drifting out of tolerance or any number of process glitches could see the network flooded with alarm messages, which can quickly impact on the performance of the whole system.

Let’s consider some analysis of how much additional capacity gigabit bandwidth offers: in broad terms the throughput offered by 1Gbit Ethernet is 10x greater than 100Mbit Ethernet, however, there is also the data packaging to consider:

Given this, the minimum frame size is 84 bytes and the maximum is 1,538 bytes. Note that Network Data is the information in the Payload portion of the frame. In some Ethernet uses, additional overhead is necessary and part of the Payload which reduces the Network Data size. With no additional Ethernet overhead, Payload and Network Data are equivalent.

With a Payload size at the minimum of 46 bytes and using Ethernet Frame format, type II (no other overhead).

What this means is that devices on gigabit Ethernet networks can send more messages. Because each message occupies the network for less time, more messages can be sent without impacting the network. We’re not talking about problems with collisions, because in general industrial Ethernet networks take care of that through other methods. Rather, it is all about how much useful data can be collected and used from each message. All of which has implications for the quality of the production decisions that are being made at the enterprise level.

Detractors of gigabit Ethernet ask if the speed of transmission matters. The speed of transmission does matter because this allows for more messages per cycle and thus more useful data collected. Even with a limit on the amount of data per device, this does not imply a limit on the data collected because data registers can be constantly changing. Hence as Industry 4.0 requires us to extract more and more useful information from our production systems, gigabit Ethernet offers the ability to provide the speed and bandwidth necessary to do this.

Use of Payload matters

Hence when compared to general purpose Ethernet networks, at gigabit speeds and depending on payload, CC-Link IE Field has the ability to offer over 660% bytes per second performance increase over TCP/IP, and over 150% increase over UDP/IP when transmitting with a minimum payload.

Using the same calculation basis: Depending on payload, CC-Link IE Field can in principle offer up to ~ 7,500% bytes per second performance increase over TCP/IP, and approximately a 2,500% increase over UDP/IP.

This shows that not only is gigabit Ethernet at a huge advantage, but that CC-Link IE Field provides an additional advantage – a Network Data increase potential of 7,500%. The comparisons show how the current advantage of CC-Link IE Field in providing greater capacity to implement upcoming Industry 4.0 requirements is significant.

For those who still need convincing that we are heading towards a gigabit Ethernet future, it is interesting to consider the companies making industrial Ethernet switches: looking at their product portfolios reveals that you can already see growing numbers of gigabit Ethernet products. If we are to realize the goals of Industry 4.0, then we have to conclude that gigabit Ethernet isn’t simply a conceptual future; it’s a very real present.

About The CC-Link Partner Association (CLPA)

The CLPA is an international organisation founded in 2000 dedicated to the technical development and promotion of the CC-Link family of open automation networks. The CLPA's key technology is CC-Link IE, the world's first and only open gigabit Ethernet for automation and an ideal solution for Industry 4.0 applications due to its unmatched bandwidth. Currently the CLPA has over 3,400 member companies worldwide, with more than 1,800 certified products available from over 300 manufacturers. CC-Link is the leading open industrial automation network technology in Asia and is becoming increasingly popular in Europe and the Americas. 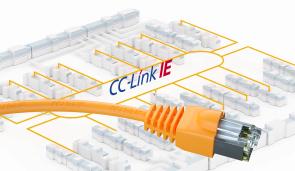 Not only does CC-Link IE Field have 1Gbit transmission speed, it also has a greater Network Data capacity than both TCP/IP and UDP/IP General Purpose Ethernet.

The additional headers used for General Purpose Ethernet frames are placed within the Payload portion of the frame.